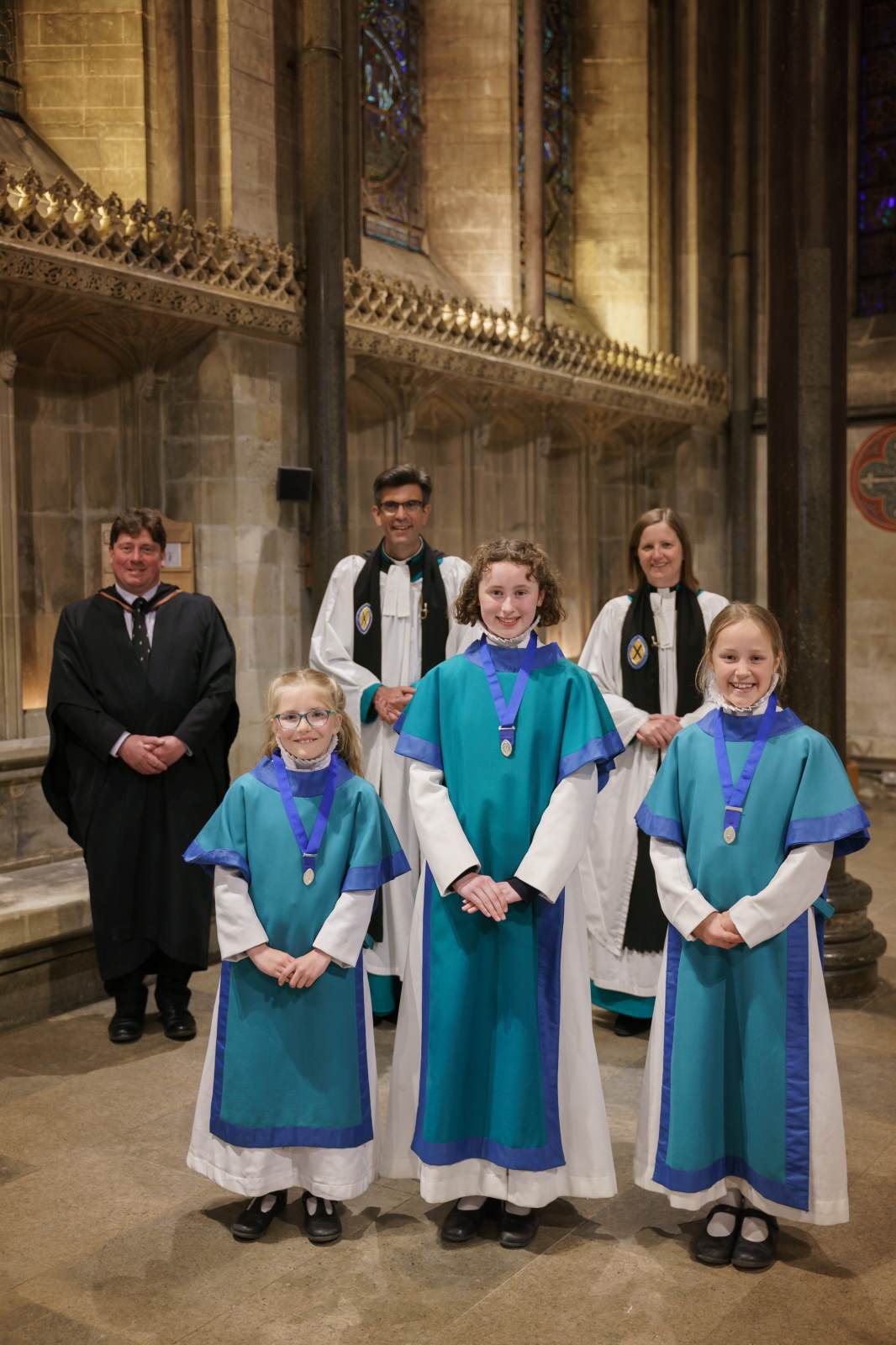 On Sunday 2 May, marking a steady return to ‘normal’, three trainee choristers, or probationers, were admitted as full choristers to Salisbury Cathedral’s renowned choir during the first ‘in person’ Choral Evensong since Christmas.

Safiya, Mollie and Cecilia were welcomed to the choir in a specially choreographed, Covid-safe service, at which they received their chorister medals and distinctive green robes.

This year is a significant anniversary for the Salisbury Cathedral girls’ choir. In October it celebrates the 30th anniversary of its founding, the first English Cathedral to allow girls to sing in parity with boys.

The special Evensong was followed by the traditional ‘bumping’ ceremony that is unique to Salisbury Cathedral Choir. The boys’ time-honoured tradition involves bumping newly admitted chorister’s heads on a special stone opposite the Vestry. The girls’ ceremony is equally quirky and takes place in the Trinity Chapel where girls are bumped on the head with a giant prayer book containing the names of all girl choristers admitted since 1991, when the girls’ choir was founded.

New chorister Cecilia Dor ‘Cc’ has already made her mark, as one of the choristers hosting the Cathedral’s virtual chorister tour, fronted by Alexander Armstrong. Cc lives in Lyme Regis, where her parents run a guest accommodation business. Both are musicians and her father plays the organ in their local church. CC’s mother Ali, is a saxophonist and a music teacher. CC has opted for the oboe and piano.

Horses are Safiya's big passion. When she’s not at school, the New Forest based chorister loves to help out at the local stables. But whilst riding may be her great passion, she still finds time to play trombone and piano.

Mollie, a doctor’s daughter from Salisbury, is keen on sport and reading, as well as playing flute and the piano. Her mother works at Southampton Hospital.

It has been a challenging introduction to chorister life for Cc, Safiya and Mollie. Normally probationers spend time ‘sitting in’ on services (reading the music but not singing), and attending rehearsals as part of their training, but that has been disrupted by lockdowns and singing restrictions for over a year.

Speaking about the challenges of running a choir during the pandemic, David Halls, Director of Music at Salisbury Cathedral said:

“It has been a tough year for all musicians, particularly those that work together to perform, like choirs and orchestras. Virtual rehearsing and performing isn’t a substitute for singing collectively. That having been said, both the boys and girls are singing remarkably well – perhaps it is the sheer pleasure of being together again that has got them going.”

Choir recruitment has been hard hit too.

Despite launching the Virtual Chorister Tour as an alternative to the cancelled Be a Chorister for a Day, and the highly successful Make me A Light virtual choir project, that saw 58 children from across the region taking part in a special online children’s service for Easter, numbers are still down.

Voice Trials due to take place in January and February have had to be pushed back to Sunday, 3 July – and the 2022 recruitment season gets underway not long after, with the Be A Chorister for a Day event taking place on Saturday 2 October.

“We have lost a year in recruitment - no two ways about it. Cancelling Be a Chorister for a Day was just the start and it has gone on from there. That’s not to say we have no candidates. Luckily, we have a promising cohort coming up for voice trials, but as the director of a choir you want to keep the numbers healthy. Choirs are very dynamic, particularly boys because their voices change, and like any elite team you need to have well-trained line up on the bench.”

Whilst Salisbury Cathedral choristers are among the elite, David is at pains to point out that you don’t need to be a ready-made singer to try out for the choir. You just have to have a good ear, like singing and be a team player.

To find out more about joining the Kathy Davies on chorister.recruitment@salcath.co.uk, or 07979 378926.