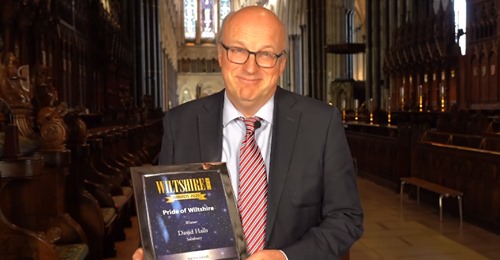 This week Salisbury Cathedral’s Director of Music, David Halls, has been in the limelight winning two notable awards for his music.

On Friday night he was awarded Pride of Wiltshire Award for his services to music in the county during an online Awards Evening, which was screened at 19.00 on 31 October. He also took second prize in the prestigious Royal College of Organists or RCO Composition Competition 2020 (category: age 25 years or above) earlier in the same week.

Mrs. Sarah Rose Troughton, HM Lord-Lieutenant of Wiltshire, presented David with his award during a special online Awards Ceremony. The award, sponsored by Trethowans Solicitors, is given to those who have made a significant contribution to the county. It is one of a series Wiltshire Life Awards that seek to raise the profile and awareness of not just profitable businesses, but also the charities and community groups.

Reading the citation during a special visit to the Cathedral the Lord-Lieutenant of Wiltshire, Sarah Rose Troughton said:

“His (David’s) wicked sense of humour combined with his passion for his subject and his generosity of spirit has meant that many have benefitted from his experience and knowledge."

“A member of the Salisbury Diocesan Choral Festival Group, he regularly conducts Diocesan Choir Festivals and is an Organ Consultant to the Diocese of Salisbury. He conducts Salisbury Musical Society and the Salisbury Symphony Orchestra and has toured extensively with the Cathedral choir, taking Salisbury and its music to the world. He is the only person we know to have conducted a choir on board a flight from San Francisco to Heathrow!”

David’s second award was runner up in the RCO Composition Competition 2020 (25 years or above category) which was won by Paul Trepte, former organist at Ely Cathedral.

The RCO Composition Competition 2020 is a national competition open to organists and composers across the country. It was launched by the RCO earlier this year as part of a series of new initiatives and opportunities for organists, choral directors, and composers facing the Covid-19 lockdown and restrictions.

The competition was judged by a prestigious jury, chaired by Gerard Brooks, the RCO President, who was joined by Judith Weir CBE, Master of the Queen’s Music, and Thomas Trotter, international concert organist and organist of Birmingham Town Hall.

“Without exception we encountered music that had been carefully and sincerely thought out, and what a variety of styles, forms, and expression we found… Clearly there are many dedicated composers out there and all are to be congratulated on their efforts. Finding winners was a difficult task and, unsurprisingly, our deliberations were wide-ranging; however, our final decisions were unanimous.”

“We found this to be accomplished and well written, lying well under the fingers. The work has a good sense of forward movement, and the musical ideas are effectively and interestingly developed as the music progresses.”

“I am delighted to receive both awards and to see music making in the county and Cathedral foregrounded in this way. Composition and music are not isolated professions. They require collaboration, and depend on the skill and generosity of others. I am fortunate to be able to work with exceptionally talented professionals and brilliant amateurs, and to have made so many friends as a result of my music making.”